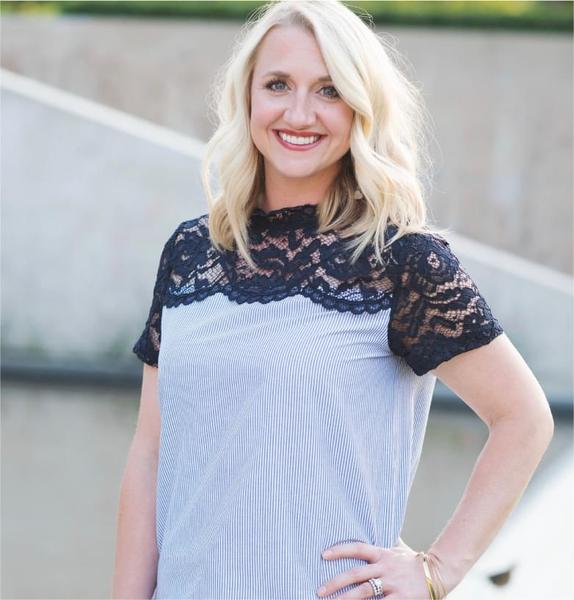 My biggest inspiration is my father, who continues to deal with skin cancer and preach the importance of sun protection. He is the reason I wanted each piece to do it’s part and protect your child’s skin from harmful UV rays while encouraging self-expression and a love for the great outdoors.
View Her Business
View Her Profile

Meet November’s Woman of the Month! Amanda Lundgren grew up in Midland, Texas. Growing up, she spent her time hunting, fishing, and experiencing anything outdoors so later in life it felt only natural to marry an avid outdoorsman. After a few years in to her marriage, Amanda had her twins, Copeland and Lucy. Her and her husband both continue to share this same love of the outdoors with their twins.

Before her children were even born, Amanda noticed how hard it was to outfit a boy. Rompers, onesies, dresses, and gowns galore were available for little girls but she felt as if the options for boys were split in two categories: play and church attire. She had yet to find easy going, essential clothing pieces of quality that could bounce back and forth between both scenarios for boys. Never did Amanda plan to have a children’s clothing line but when she discovered children’s true outdoor wear wasn’t available, she began to play with the thought that she could develop it. The idea of a “preppy but practical” outdoor kids line first came to her mind in 2014, but in 2015, after her twins were born, she hit the ground running and “founded BlueQuail Clothing Co with the belief that parents need clothing that is as practical as it is fashionable. For boys and girls.”

Why quail? “Every respected brand has something that identifies it” Amanda states, “I wanted something that represented Texas and it’s outdoor culture. Quail was one of several animals that first came to mind. After doing some research, I found that quail stay in coveys even after they are grown to protect one another and their chicks from danger and predators. They will even protect little chicks that are not theirs. Considering our brand is all about wanting to protect your chicks from the sun, I knew this was perfect.”

This leads to the most important part of her company: UPF 50+. Before BlueQuail was founded, the only clothes you could find with that kind of sun protection were swimwear, not day-to-day pieces. “My biggest inspiration is my father, who continues to deal with skin cancer and preach the importance of sun protection. He is the reason I wanted each piece to do it’s part and protect your child’s skin from harmful UV rays while encouraging self-expression and a love for the great outdoors.”

After countless hours spent researching, Amanda found herself in New York City under the guide of Mercedes Gonzales, who owns Global Purchasing Group. Once she realized she had support from concept development to sales, she knew she had the right team to find the right fabric to fit the safety of her garments as well as the fashion in her head. After two years in the development stage she finally had a product she was ready to bring to the market. “My line is inspired by the good times and good vibes of days spent under the sun. The entire collection is designed to easily transition between polished and and playground and made to last.”

And finally an official Lookbook came to fruition for the first BlueQuail line. Within the first 24 hours, Amanda was contacted by Katwalk Kids from Dallas Market with an offer to place BlueQuail Clothing Co. in their best kids showroom in their market. Fast forward to after the market and BlueQuail had already been picked up by seven different boutiques in almost all of the major cities in Texas. All of this was done based on pictures from the Lookbook alone. Amanda’s attention to detail and the time that she spends on each design and print really speaks volumes to the quality she aims to produce. The ‘proof was in the pudding’ and her idea began to work.

Since then Amanda has created multiple different lines for both boys and girls while most recently expanding her production to create matching shirts for men due to such high demand. BlueQuail can now be found in over 80 stores nationwide and has zero plans on stopping anytime soon. You can be on the lookout for the cutest UPF 50+ swimwear and performance T’s coming in 2021.

While the year of 2020 might have temporarily adjusted our annual plans, Amanda loves the deep-rooted traditions of our city. “From the Rodeo, to the Stockyards, to Bass Hall and The Kimbell Museum, I have an interest in several areas. I love that Fort Worth embraces all of those things all at once.” Without a doubt, we will get back to these beautiful traditions because those are the moments that make our city the incredible place that it is.

When asked about her impact as a businesswoman on this city, Amanda was honestly stumped. “I’m not sure slinging kids’ clothes makes an impact?” she asked. Then she thought about her journey. She went from an idea, to a well-researched design eye, to a mission to keep kids safe from the sun, to placing her creation out to the entire country. “Positivity,” she later stated, “if you have an idea, pursue it. Stay positive. It’s not easy. Nothing comes easy, but the reward is worth the wait.”

Amanda, your grit, attention to detail, and ‘boss-mom’ attitude are not only inspiring, but real. You don’t cover up the hardships, yet you made your dream come true. Thank you for the product you created and for keeping our local kids safe from the sun! Discover Past Women of the Month