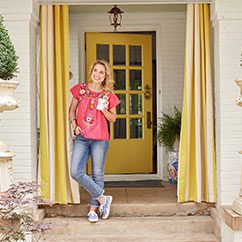 HGTV’s “One of a Kind” host

Grace Mitchell is a local mama, Better Homes & Gardens Stylemaker, Domino Magazine Style Influencer, Interior Designer, Stylist, and Freelance Writer. Originally, she received a  Bachelors of Science and a Masters of Educational Philosophy from TCU and taught Deaf and hard of hearing students in FWISD.
After she and her husband had their four babies, she started a blog in 2012 called  ‘A Storied Style’ as a way to keep her toes in the creative world while mostly being a stay-at-home Mom.

” I started doing a lot of house projects and posting them on my site, and that got me noticed. I started working with big brands like Home Depot, Serena & Lily, and West Elm. I also began speaking at events. Speaking at blog conferences were a nice getaway in those days. I usually had a nursing baby with me! I always took my kiddos everywhere with me. I could accomplish so much with my quadruple stroller! We called it ‘Mitchell Stadium’ haha – there were two kids on top that faced me, and two on bottom. Estate sales, furniture stores, antique markets – they went with me. In those early years, it took some training, and we left plenty of stores ha, but looking back now, I feel like it really prepared them to be on lots of job sites with me. “

As her home projects picked up and did well on social media and in publications, she began to take on clients and ‘Storied Style Interiors’ was born. The television part of her life started two years ago when the production company, High Noon Entertainment, reached out. After the initial Skype conversation, they made their way to Grace in two days and began filming a pitch tape for HGTV. The network bought the pilot for ‘One of a Kind’ after they saw the pitch tape. They liked Grace’s design mantra of centering people’s designs around their story and memories and unique things about them. They liked how the projects were beautiful, yet approachable and meaningful. The network also really appreciated Grace’s team – a group she had been working with for years.
For the first time in HGTV history, they sent the show straight to series! Therefore, the initial pilot became one of the episodes in the first season. Filming for the eight-episode first season of ‘One of a Kind’ began in July of 2018 and finished up the last home in December. All of the homes are in Fort Worth.
‘One of a Kind’ airs every Tuesday at 9pm starting March 19th on HGTV!